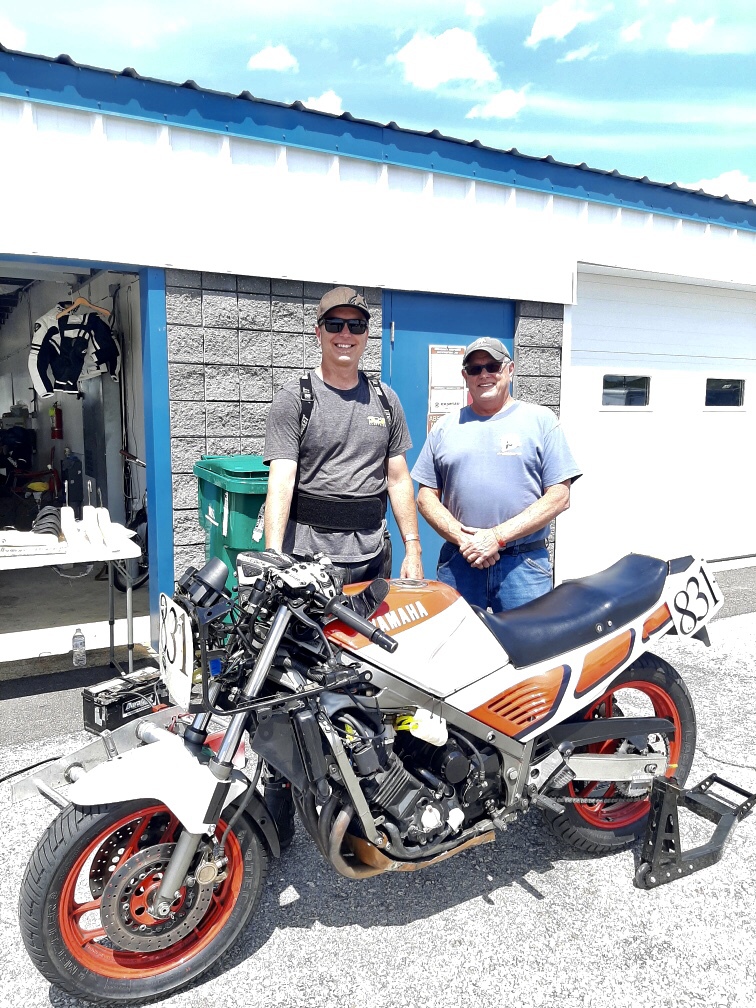 Being a guy that has a motorcycle… no, make that a Vintage Motorcycle addiction, it was a no brainer when my buddy Vinny messaged me one day and asked if I had any interest in racing a “lender” 1986 Yamaha FZ700 for June’s USCRA race weekend here in New Hampshire at New Hampshire Motor Speedway.

I think my first response was, “are you serious?” Turns out he was. Vin’s friend Matt Camillieri and his dad Frank are a lifelong father/son team of racers. They’re always open to roping new people in and dangling the fishhook.  They were willing to not only lend me a bike but prep it and deliver it to the track! Vin joked that I would be like Rossi having a track prepped Yamaha waiting for me at the track…   Yes Vin, but instead of being called the Doctor, I’m just going to need a doctor.

The day before the race I packed up my trailer, my borrowed leathers and air mattress, and my brand new Icon helmet that Rick’s Motorsport Electrics bought me.  It’s great working for a company that has built a near 40 yearlong great reputation in the motorcycle industry. In fact, Rick’s was sponsoring a class in this year’s series.  My son Ethan and I hopped in the truck and headed up to NHMS to check in, set up, and take part in the USCRA race school on Friday night. 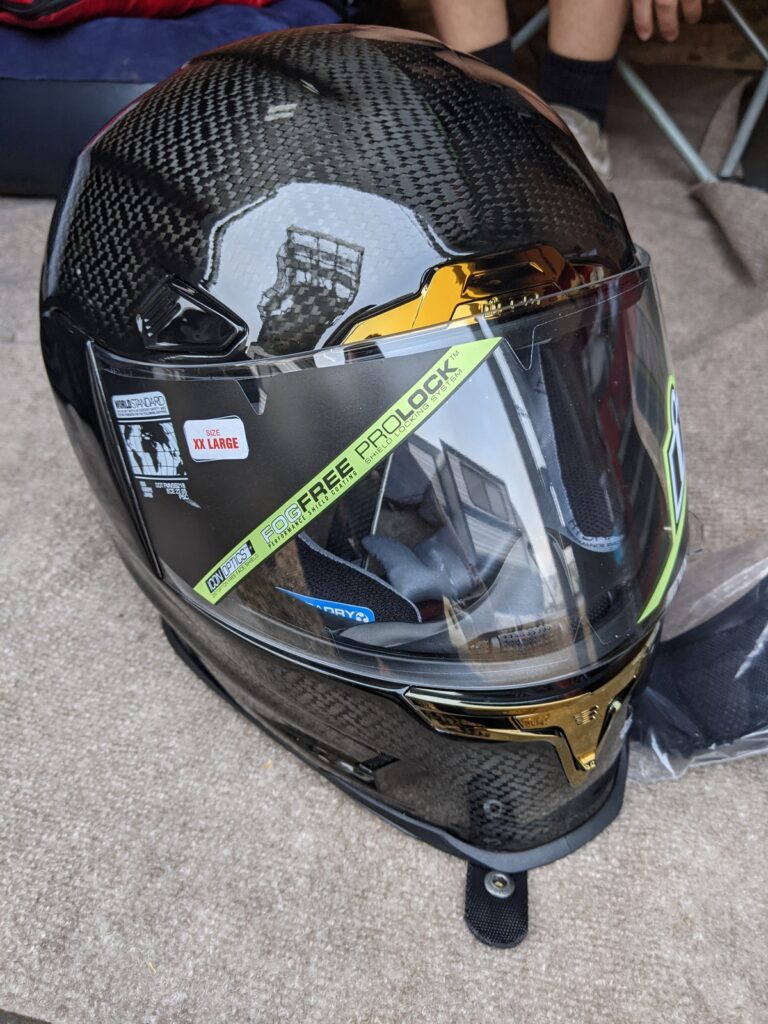 That first night ran long as we went over the flags and the pit in/ pit out procedure. The sunset over the stands was phenomenal during the track walk. It nearly took my mind off the bumps and gigantic cracks in the pavement that only reveal themselves at walking speed and completely disappear at race speed. 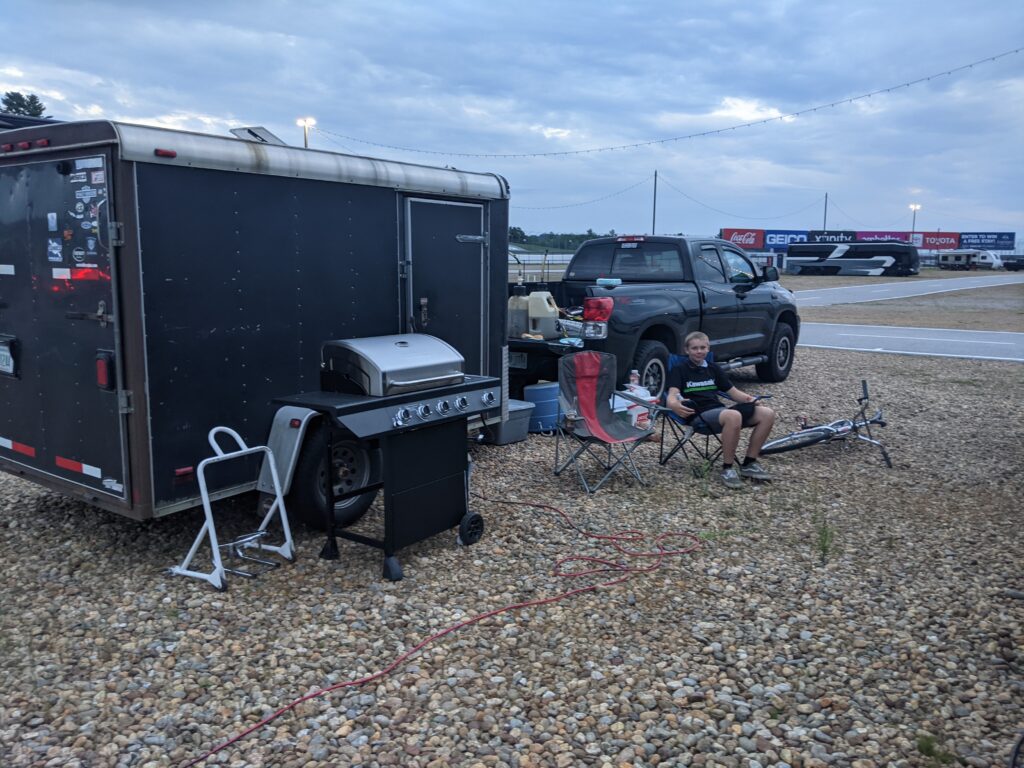 Once back in the paddock, we did our tech inspection with the school instructors. All went well as the FZ700 was set up perfectly for the series. After that it was back to the truck for a quick sandwich and a beer, then off to the air mattress for bed while Ethan slept in the back seat of the truck. I think I slept about 2 hours that night in the trailer. In part due to the rain beating down on the roof like a snare drum, but mostly due to the anticipation and excitement of what the next day would bring.

We were up bright and early on Saturday morning for the riders’ meeting. Everyone gathered around for the briefing on the day. They went over the race order and a few of the flags along with a few general announcements. One of them being a welcome to all the rookies that were there that day. As we raised our hands with our day glow orange vests on, there was a small round of applause along with a chant from a few of the veterans… “Fresh Meat, Fresh Meat!” Amusing? Of course. Intimidating? Definitely! 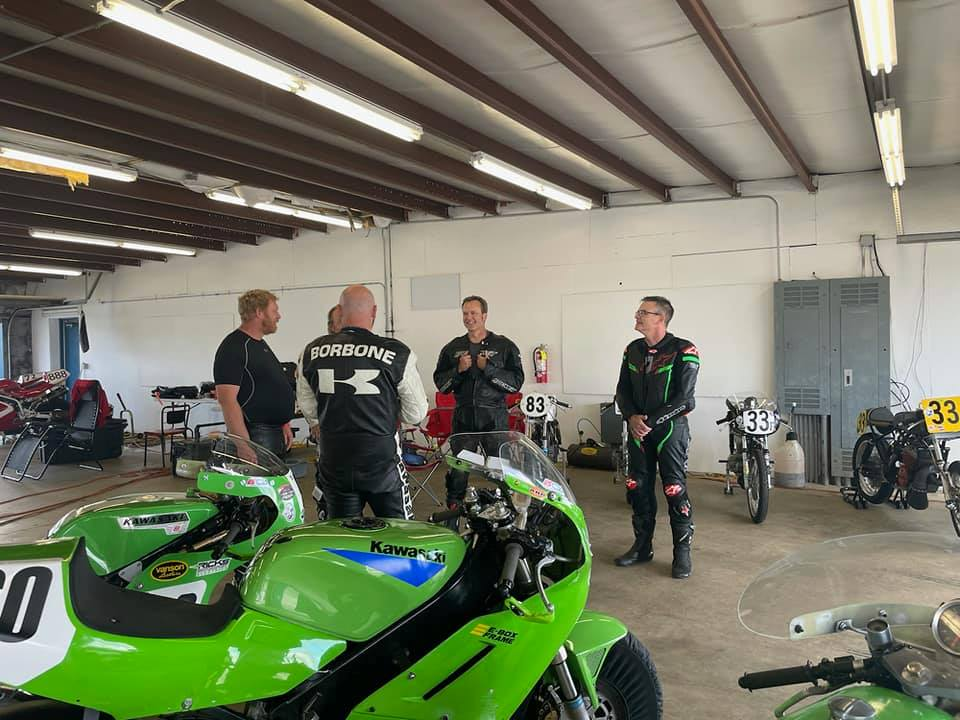 On our first rookie practice of the day, we were to follow the instructors while increasing our speeds with every lap. I had not been on a paved racetrack in 20 years. I once did a track day on my 98 ZX9 for fun, but that is where my track experience ended.

As the speeds increased it was clear: this FZ700 could build a head of steam on the straights. It was flat out fast, and I could easily get way over my head going into the turns. Especially the ones with elevated speeds going into them. I had to remind myself to slow it down, take it all in, and try to learn.

Well, that theory lasted about 4 seconds.

That was about the amount of time it took for me to get to turn one at the drop of the green flag during the rookie race. I wasn’t any better than any of the other guys and gals in that race, but it was clear that my bike was fast. Possibly too fast.

As I pulled away from the others, I had to remind myself once again to not only slow down, but that the rookie “race” wasn’t really a race at all. It was more like a test. If you fell or got black flagged for any violations at all, you were done for the weekend. It seemed the others were all aware of that as I twisted the throttle for way too long. After going in hot a few times, it was clear that I needed to dial it back, and by luck I did manage to stay on two wheels and cross the line with myself and the borrowed bike in one piece.

The high of “winning” the rookie race lasted right up until the green flag of my first real race of the day. This was the moment that I was, quite literally, left in the dust. Once again, I found myself going in hot just about everywhere. But this time I had guys passing me on the left, then the right. It felt as if I was going through the turns at half of their pace; turns out, I was.

This is the difference between Experience and No Experience when it comes to motorcycle racing. Even though you think you are a good rider and have been riding for most of your life like I have (about 35 years or so in my case), there are guys out there that have been racing longer than I have been alive. The grandpa look and smile in the paddock quickly changes to race face when the flag drops. That 80-year-old guy has been riding on the race track for 60 of those years. When he blows by your 100+HP  sport bike on the inside, dragging the peg on his 50 year old single cylinder 175cc two stoke, it’s not only very humbling but quite startling!

At the end of the day when the leathers come off and the track is cleared, everyone grabs a cold beer and sits down on the steps of the Victory Lane for the awards ceremony. It’s actually more like a family gathering, lots of hooting and hollering accompanied by the occasional thank you speech and pat on the back. They even brought up all of us rookies for a special round of applause and another rousing chant of “Fresh Meat”. 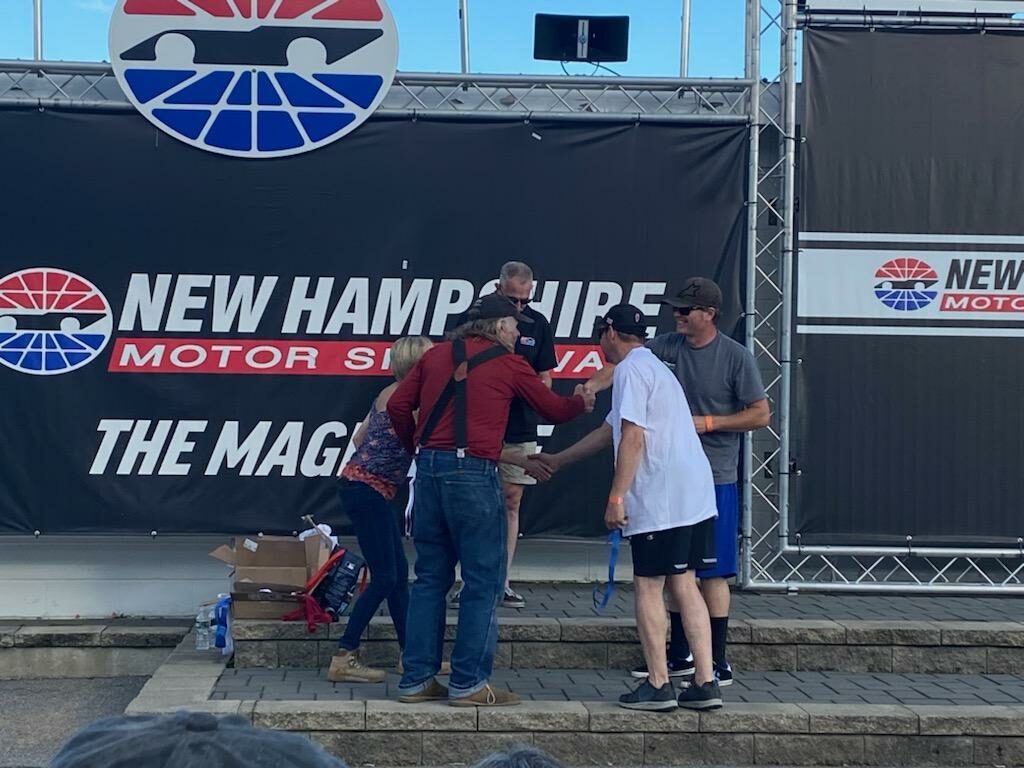 The club certainly wants new members to not only feel welcome, but they want us to return. I would say they succeeded with that one. I ended up doing the rest of the events for the shortened covid season and even managed to pass a few guys on my newly acquired Rick’s Motorsport Electrics 1972 CB350. In fact, all the rookies returned along with a few new smiling faces. 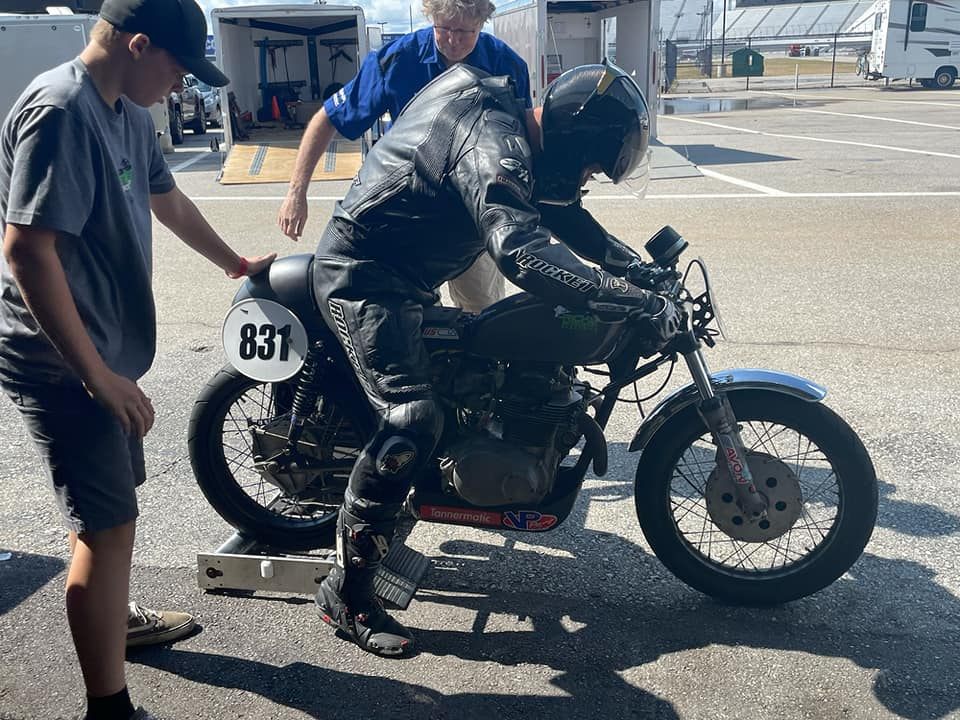 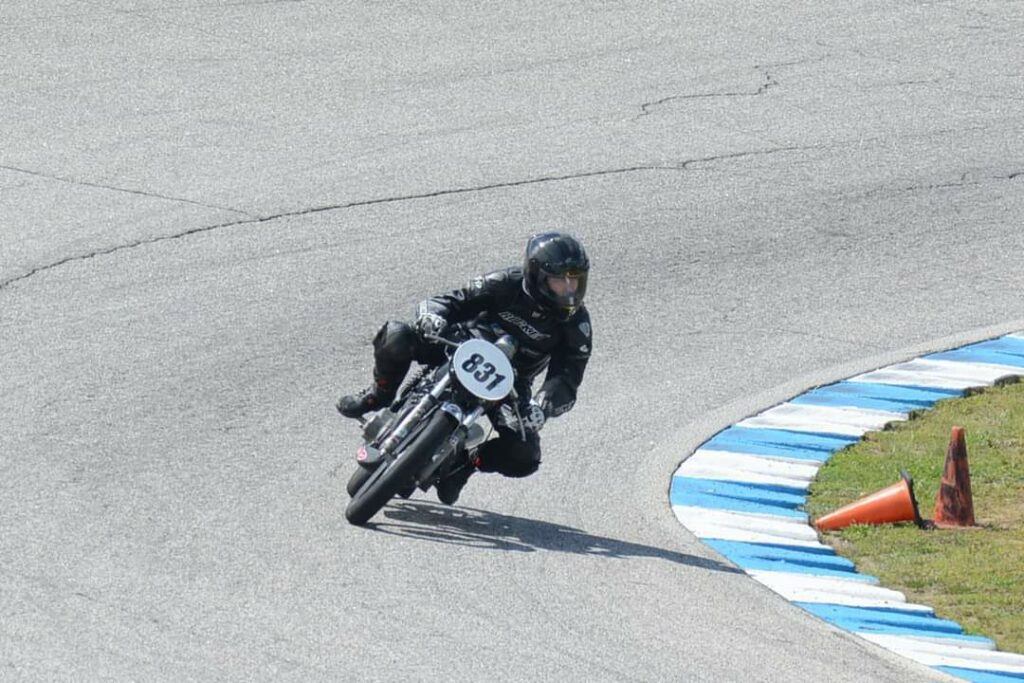 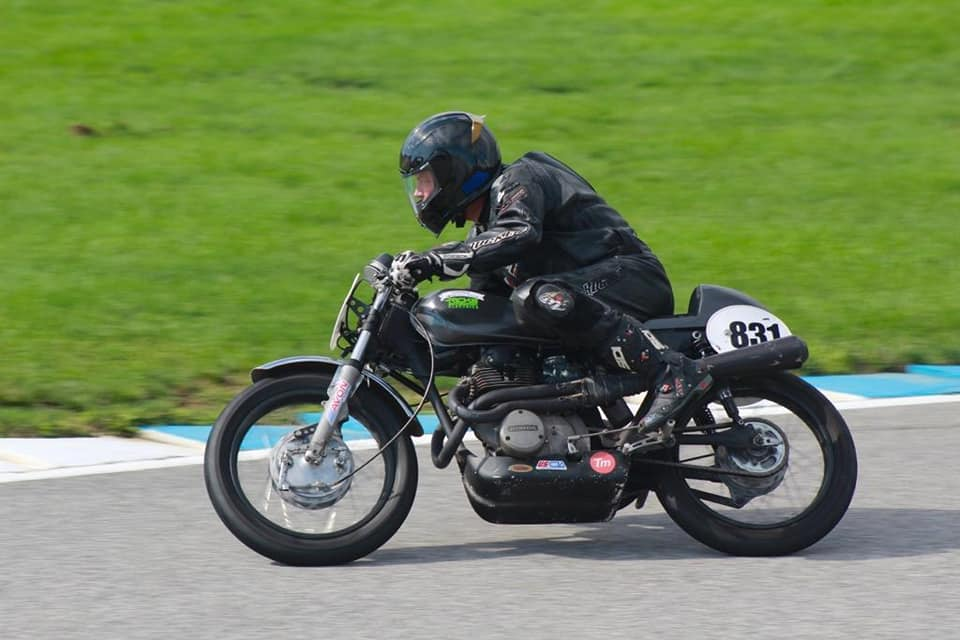 Will I be back? Let’s just say that the fishhook that Vin and the Camillieri’s dangled is set and they reeled me in. Thanks everyone for a great time and a brand new kind of Old Motorcycle addiction. 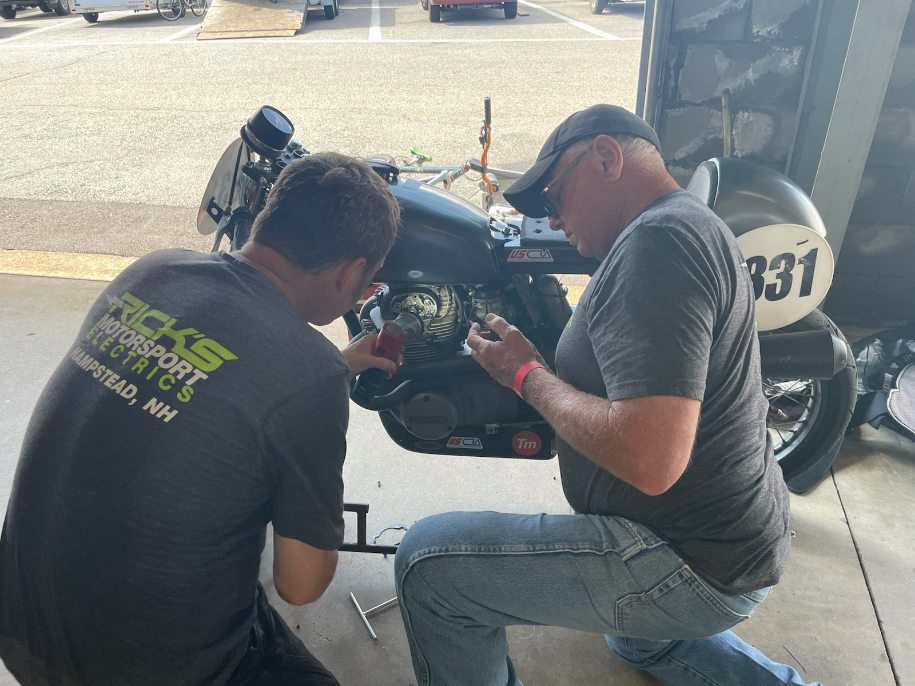 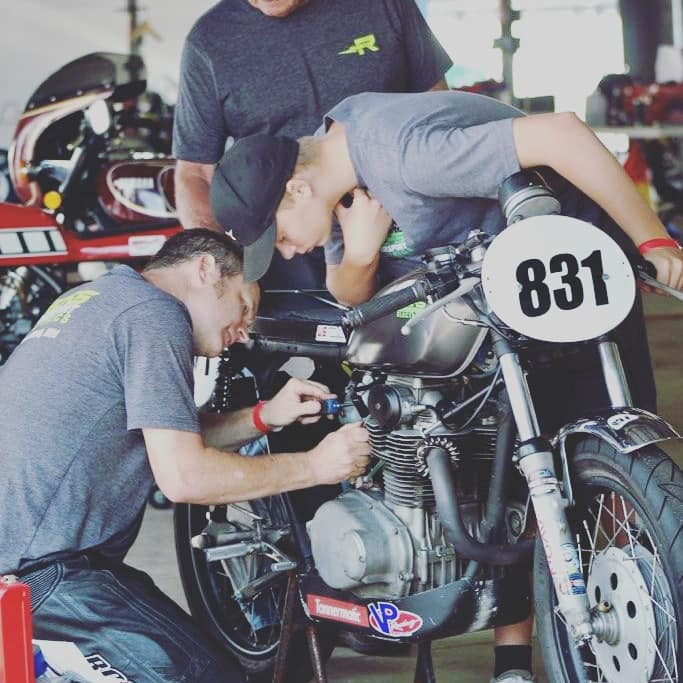