Choosing the correct rectifier regulator for your Suzuki 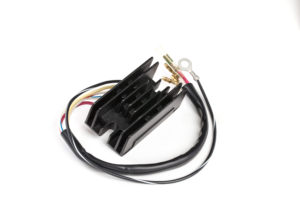 terminals, a DC positive with a female bullet

terminal, and a 6mm eyelet on the ground wire

going to a 4-position female connector and

the ground ending in a female bullet terminal

the rectifier/regulator itself with no lead wires

If you have any further questions please visit our website at ricksmotorsportelectrics.com or call us at 1-800-521-0277.